JIRA Software Cloud functionality has been recently reimagined and their roadmap is the feature that is getting now most crowd favor. Roadmaps allow teams to sketch out the big picture and visualize what’s planned.

Dependency mapping and progress visualization are the new features on the JIRA roadmap that help to be more effective in planning. JIRA also announced a third feature – hierarchy view, that is coming soon.

Dependencies between pieces of work is an essential variable that should be taken into account while planning. Without them, it is rather difficult to understand risks associated with delivering a piece of work, uncover blockers, and make decisions on what’s built and when.

Now JIRA Cloud allows mapping dependencies between epics on the roadmap to staying ahead of blockers. This visualization simplifies planning the best course of execution and communicates the rationale behind the plan to stakeholders to manage expectations. 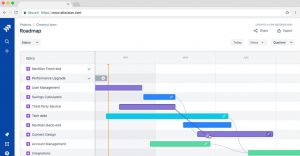 Roadmaps without syncing with your team’s progress look outdated.

If your team is moving fast, it can quickly become tedious to track each piece of work and what its progress is.

The new feature allows you to stay in sync with your team’s progress on each epic, without digging for details on individual pieces of work. 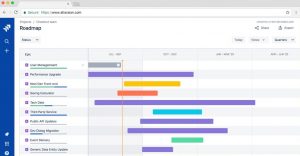 If you have doubts that these features will be useful and demandable and that a roadmap is really popular feature, then here are some proofs of the importance of any roadmap:

Why is a roadmap a trendy feature?

Any product roadmap leads a team to create a plan that integrates market and customer needs, product evolution and new technology introduction at the beginning of their journey. The roadmap performs as a guide for the team and allows it to recognize and act on events that require a change of direction.

Here are the key reasons for roadmapping:

If you are just starting out your work with a roadmap, then it’s worth to explore some other companies’ proposals. Here are some great options:

Customers are the most important part of every business. If your customers are satisfied, your business will grow and succeed.

PMWorldNetwork brings together the relevant content for product managers and business owners from the variety of industries.

We work with the support of welldoneby.com, where you can find the best firms for your next big project. Our community is aimed to collect and provide high-quality and the most recent news, coverage professional events and business cases from top sources.